Milam & Greene Whiskey is introducing The Castle Hill Series Batch Two, the second release of its limited-edition batch of 13-year-old hand-selected straight bourbon whiskies bottled at barrel proof. The Castle Hill Series celebrates the art of batching well-aged casks, one of the many methods Milam & Greene enlists to create its award-winning range of whiskies. Just 26 vintage barrels were married to create this superb whiskey, making it the most limited release from the acclaimed distillery that was recently lauded for its “Best in Show” whiskey at The American Craft Spirits Association competition.

The Castle Hill Series carries the oldest age statement in the Milam & Greene family of whiskies, and each batch includes the distillery’s most exclusive casks. The series is named for the historic Texas Military Institute, also known as “The Castle,” in Austin, Texas. While the Milam & Greene distillery operations and warehousing are in Blanco, Texas, The Castle is home to Heather Greene’s blending lab, and its old-world elegance serves as an inspiration for the Milam & Greene CEO and master blender.

Greene is renowned for her exceptional whiskey blending skills, and The Castle Hill Series showcases her ability to select the right casks to blend to develop complex flavors. Greene honed her tremendous whiskey blending skills while evaluating Scotch whisky for the Scotch Malt Whisky Society in Scotland, as well as while working with numerous distilleries around the globe before bringing her talent to Milam & Greene in 2018. Under Greene’s direction, whiskey blending is essential to creating core Milam & Greene whiskies including the Triple Cask Straight Bourbon Whiskey and Port Finished Straight Rye Whiskey.

“The guiding principle in blending The Castle Hill Series is to create a traditional bourbon that whiskey drinkers will love,” says Heather Greene, Milam & Greene CEO and master blender. “Each cask used to create The Castle Hill Series has a different personality. Those personality traits are developed through aging over a long period of time with influences from the environment. We hand-selected each barrel-aged between 13 years, 10 months, and 17 days at the youngest, and 14 years, two months, and 13 days at the oldest, to identify specific characteristics that we want in the finished product. The result is a multifaceted bourbon with layers of nutty, spicy, fruity, and oak flavors.”

Milam & Greene The Castle Hill Series Batch Two shines in the glass with a deep burnt amber color. On the nose, it is a dichotomy of youthful vigor and aged splendor with scents of warm peach cobbler, brown sugar, and vanillas with hints of almond and milk chocolate. Bottled at cask strength of 111 proof (55.5 % ABV), this potent straight bourbon whiskey features velvety, opulent flavors of caramel, cinnamon, cherry, vanilla, and tobacco with a warming and long finish.

Twenty-six barrels were used to create The Castle Hill Series Batch Two. The ages of each barrel are detailed below:

The birthplace of bourbon is booming 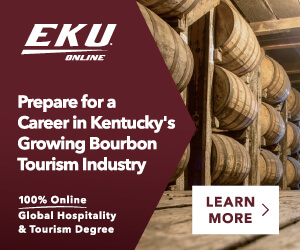